This page will be updated regularly after new shoots. Come back to see what I’ve been doing…

Over the last year I have walked the route of a proposed road around Hereford, and do feel dismayed that valuable heritage and countryside will be lost for rather questionable benefits.

I have added a dedicated page on this project ‘The heritage we may lose’, but you may wish to see a short booklet of images following the route:

The Heritage we may lose sd

Another project has been photographing local Herefordshire churches. Recently I was pleased to present a talk to a local history society concentrating on stained glass windows, and the talk also encompassed images of Hereford, Gloucester, Lichfield, Wells and Exeter cathedrals, Tewkesbury Abbey and churches in Dorset.

These are of Tewkesbury Abbey and Exeter.

I intend to create a page of the local churches project soon.

Have been exploring more of the Herefordshire landscape that stimulated the artist Brian Hatton. There is now a new page – Lugg Meadows to Mordiford.

I have taken most pictures of Breinton and Breinton Common from the north bank of the Wye – I have changed the featured image to an image taken from the opposite bank, with the island near Breinton Common underneath the sun and trees.

Across the River Wye from where I live there is a small settlement of Eaton Bishop. The Norman church is delightful, and I was initially attracted by the floor tiles but it is the mediaeval windows for which  the church is renowned. 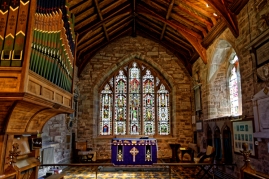 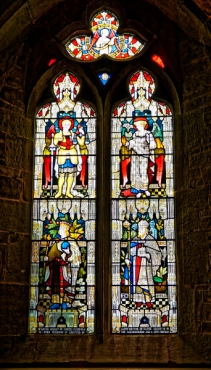 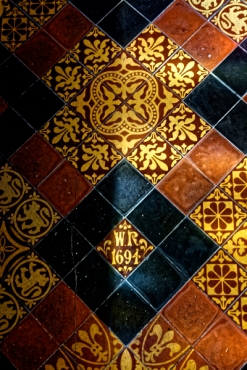 Near to Hereford Cathedral is All Saints – you can see its spire from many locations in and around the city. Its a nice place to have a coffee or lunch and there is a side chapel where there are often craft fairs.  But it is the interior architecture that attracted me together with the exposed wall painting. 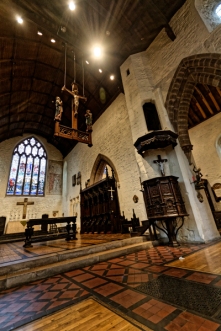 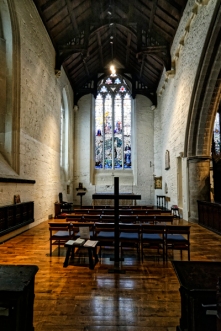 Terrific light led to these pictures: 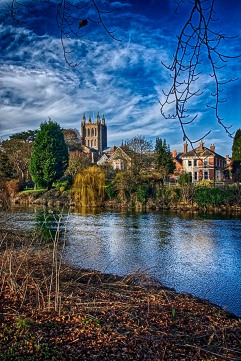 I visited Hereford Cathedral in anticipation of taking photographs that have recently been commissioned from me. Whilst working out locations in the Choir that will be photographed I couldn’t help but admire the new altar cloth made by the Cathedral’s Broderers that has just been consecrated. The predominantly green design looks really good and picks up the green in the floor tiles.

Going beyond the brief I have been exploring the life of organist George Robertson Sinclair (1863-1917). Sinclair was a friend of Edward Elgar and walked the banks of the River Wye with him and his beloved bulldog Dan. Indeed, it the yelps of Dan when he fell into the river that is depicted in Variation XI of Elgar’s ‘Enigma’ – and the spot Dan fell in the water is commemorated by the figure and plaque on the south bank opposite the Cathedral. 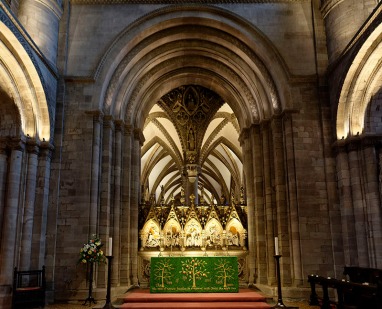 The weather in the last few days has been drab as well as cold… but today I decided to go to the top of the hill and see if there was light above! There was some sun attempting to break through the moist mist. not yet melting frozen cobwebs. I am enormously attracted to a group of trees in an area known as ‘The Park’ and hoped for some shots with some atmosphere.

As you can see, I’m aiming for a less saturated style, and simpler.

Two shots, of a frosty morning near home at Breinton Common, the other at nearby Drover’s Pool.

I’ve added two shots on the page about the artist Brian Hatton, but these are of a frosty landscape of the last few days: 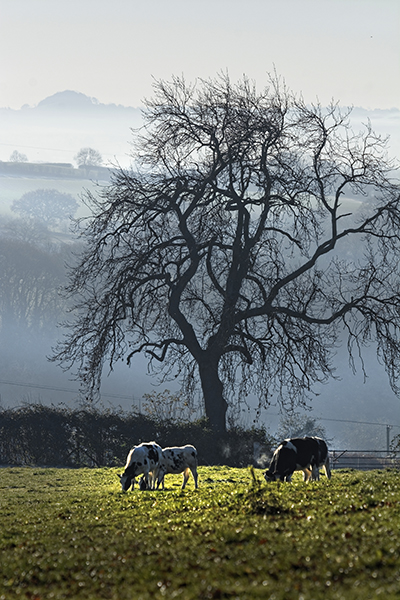 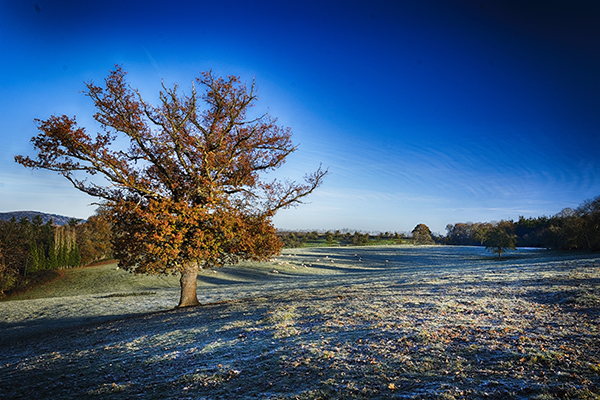 One of the pleasant walks around Breinton is along the Drovers trail that passes alongside Drover’s Pool and the nearby woods:

I met Kathleen Freeman who produced two photo essays of Herefordshire, and runs a tea room at Eardisland.  This little village is immensely photogenic: 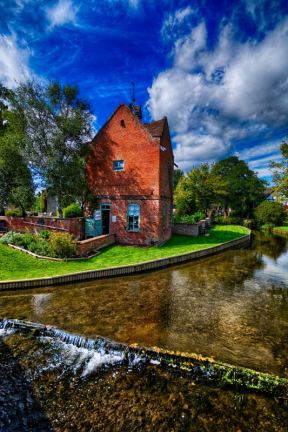 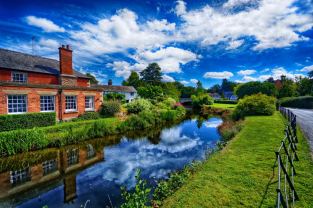 It included Orchard Art – visitors were encouraged to collect twigs from around the apple trees to adorn designs of bugs. There was also an opportunity to learn about stonemasonry from Lottie O’Leary stone carver. Many children also found multifarious bugs with nets before bottling in specimen jars and identification.

A highlight was the aerial dancing by ‘Everybody Dance’ whose performance ‘Save the Bees’ was amazing. Jess, Francesca and Eleni soared with grace … and fun! 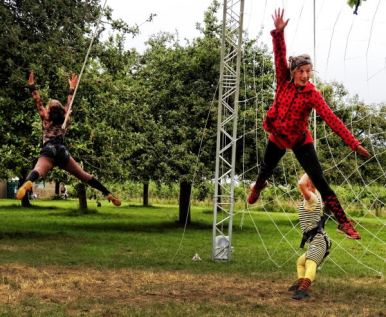 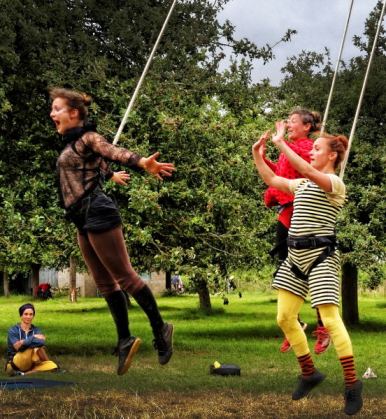 Sometimes heavy showers delayed progress, but yesterday was a great day to undertake the Brian Hatton walk again. The page is worth visiting to see the terrific cumulous and cirrus clouds as the featured image.

Thank you for the companionship of all the participants and especially Robin for his knowledge and witticisms.

A new page – Breinton and the River Wye is the stimulus for the artist Brian Hatton’s landscapes – see the new page – Wyeside stimulated by Brian Hatton!

The weather hasn’t always been superb, but one dull day I was taken to a fascinating church – St Catherine’s at Hoarwithy.  The altar was amazing, as also the mosaic flooring. 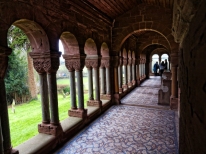 Hereford was blisteringly cold, but rather than escape for a coffee in the warmth of Marks and Spencers I couldn’t resist the low sunshine that produced wonderful saturated colour on the Cathedral walls. 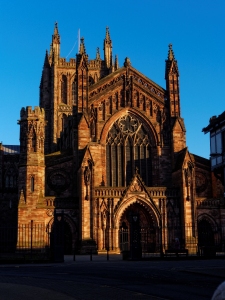 I risked the muddy landscape and walked down to the bottom of the River Sapey, and was rewarded by Old Church at Lower Sapey. This is a fascinating building, plain but the plain plastered walls create fullness of atmosphere; now abandoned, it goes back to the 12th Century. It is being renovated by the Churches Renovation Trust, the church has setting beside the small hamlet and river. 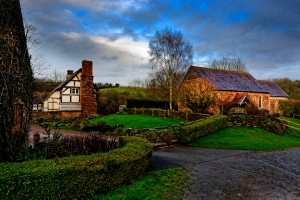 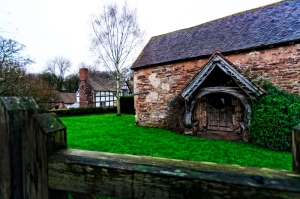 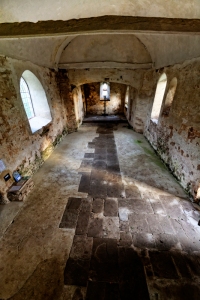 Have been takin pictures with both my Nikon (D7100) and Olympus (OMD EM-5). The blog page has some commentary on the images.

Brockhampton hosted a delightful choir at Christmas … and despite muddiness produced great pictures – National Trust: don’t you want this one?

The leaves are dropping… 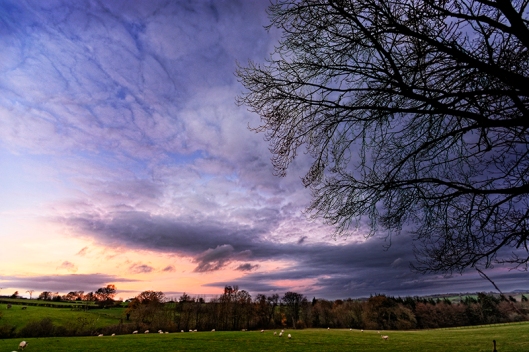 December has arrived and the leaves have almost left us, leaving an emptier landscape. These images include the farm at Pixhill.

The path was fine… at first… but became muddier and muddier. My new boots could take it, however and I did reach the River Sapey before walking back via Steps Coppice and Line House Farm. 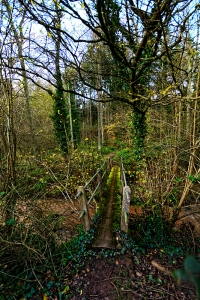 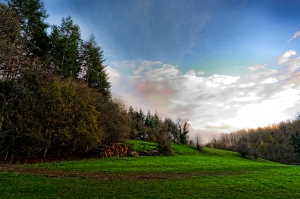 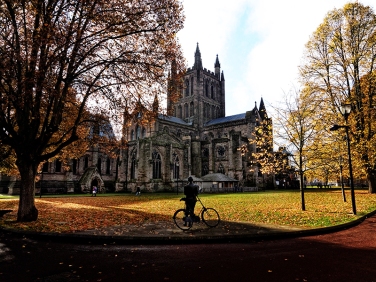 A few images around Breinton, a few miles to the west of the city Hereford  – the orchard next to the church, swans on the River Wye, and a mono look at the open countryside above Breinton Common. 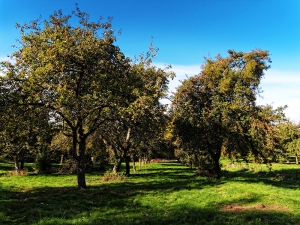 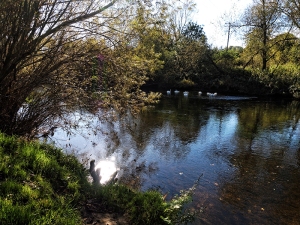 Went for a walk to discover what is claimed to be the most haunted site inn England. It is an abandoned church at Avenbury, a few miles south of Bromyard. It is currently overgrown but some abandoned gravestones can be seen from the public footpath. The main tower is still standing.

To go to other Gallery pages click from the menu

If you would like to leave a post, or contact Phil please email or use the COMMENT page for your response. Your comments/views are invited! There are hundreds of Phil’s images at alamy – clicking the ALAMY logo take you to that site.