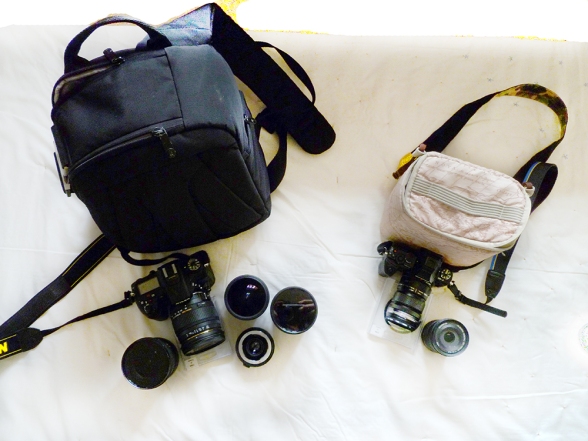 Photographers seem to be moving in two different directions – either to the much larger and more expensive FX models, or looking towards the more compact mirrorless cameras, usually with a MFT-sized sensor or smaller. You can see my gear listed elsewhere but I have summarised my findings below and indicate when I use the cameras. These are my personal comments, but for some there is a clincher – at the end of this piece. (You may also wish to note my comment on 22/12/2016 on the blog page.) Yes, both have advantages depending on what is being asked of them.

There is a table below, but digest together with these comments:

The D7100 feels like it will last much longer. The EM5 camera, and especially lenses and accessories seem more delicate.

The EM5 seems technologically advanced, but occasionally the camera’s system has completely frozen even though the screen viewfinder is still live.

Incidentally, I have never run out of battery power using the D7100, but have several times with the EM5 – even though I switch off whenever possible to conserve energy. I now use both sections of the grip in order to give more power, but portability suffers a little.

There is a huge range of lenses of all focal lengths, including macro and specialist, available in the Nikon system, but the micro four thirds system is still younger – not many MFT lenses are yet available used. BUT… any Nikon lens can be fitted to an EM5 with an appropriate adapter albeit losing auto focus. My old Sigma 17-500mm lens is not AF when fitted to my EM5, but it is now, in effect, VR on an Olympus body! That said, it is a bit of a contradiction attaching such a large lens on a tiny MFT body!

Perhaps you may be interested in experiences updating firmware. I’ve never had any problems with Nikon/Fuji/Panasonic, but after updating my EM5 the connected 12-50mm EZ lens became a brick! Because a mirrorless lens is dependent on communication with the camera it does not work AT ALL, the screen is blank.

When do I use each camera?

Of choice, I will use my D7100 as a superior camera in most picture taking situations. The exceptions are

Incidentally, I do not see a need to move to FX because I can achieve good quality with available DX gear. I accept that improved IQ could be accessed by FX in some circumstances, but portability and especially the penalty of significant economic investment will continue to be a barrier.

I do use the grip with the EM5, but I leave the battery grip behind. As I expand my interests into portraiture I may well use this extra part of the grip to gain more battery life in a studio shoot as well as make use of its vertical shutter release and control.

Lenses are a big issue for me because I make many landscape and architectural images. The MFT system does not go wide enough – the widest lens available for MFT is probably Samyang’s 8mm = FX equivalent 16mm. On DX this = FX equivalent of 12mm – huge difference in wide angle terms. On the other hand, MFT gives more telephoto reach – put a 400mm lens on the EM5 and it = FX equivalent of 800mm… AND with the superb anti-shake mechanism within the EM5 body. And yes, I do occasionally use Nikon lenses on my EM5 with an adapter.

These are comparisons of each camera. But what of reliability? In the real world?

I have never had a problem with my Nikons – reliable, handle well, good pictures. Nikon do seem to get it right – not many firmware updates (only 3) have needed to be released.

The Olympus never feels so sturdy; the pins of the battery/grip soon bent and the viewfinder rubber broke up (I now use an EM10 viewfinder rubber – bigger and sturdier.) For everyday shooting the camera is fine, but I do not think it is sturdy enough for more heavy use.

I updated the camera firmware last month (now up to 11th update) but, despite following Olympus instructions to the letter, it trashed my 12-50EZ lens. If the camera cannot recognise the lens there is no image, the lens is in effect dead in any mode or setting. This can’t happen with Nikon. The only solution is to send the lens to Olympus.

On the matter of firmware updates, Olympus is also out of step in that it requires use of their own software connected to the internet, rather than the more usual method of updating by copying to a memory card. If Olympus would allow users to do this it is just possible that the firmware updating could be rectified by the user, and I would suggest that updating via memory card is likely to be safer. Instead, Olympus demand £100 to repair a lens that was damaged through Olympus’s own procedure. This cannot be right or fair. It certainly makes me doubt whether I can remain loyal to Olympus despite having Olympus cameras going back to the c-1020l, c2000z, c5050z, etc. (those cameras updated firmware conventionally).

At the time of writing, I have received the lens back from Olympus having paid for a repair, and I have noted from other online forums that I am not the only one who has suffered this issue. If Olympus would take a more conciliatory position I would not be posting this missive.

I will continue to use both cameras for the time being, but may well consider changing the Olympus brand / system over time despite its good IQ.